2013 is the Year of the Snake.  I have been a member of a woodblock printmaking group, Baren (http://barenforum.org), for many years, and every year we do a print exchange for the appropriate animal of the year according to the Chinese zodiac.  Though the group is indeed a woodblock group, for the New Year's exchange we can use any form of printmaking we like, which gives a lot more flexibility (which I like!).
Being a person who is much more in tune and connected with furry creatures than with scaly ones, when I started thinking about what I was going to do for year of the snake, I was coming up blank at first.  I love the shapes that snakes can get into, and the patterns, but I just wasn't seeing an image in my head.  We have been doing this print exchange for so many years, this is actually the second time I was faced with this challenge.  The first time, I did a print with the snakes forming shape of a champagne glass, as seen below (this is a hand-colored woodblock print). 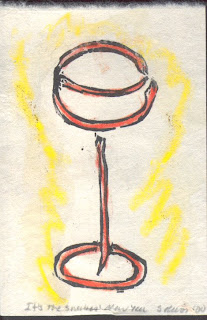 ﻿
I wanted to do something different this time. I started thinking about my series of hybrid animals (you can see many of these on my site, http://sarahhauser.neoimages.net).  Some of these are comprised of one type of animal that is stereotypcally thought of as dangerous, put together with an animal which epitomizes warm and fuzzy.  I began to imagine a new type of snake.... ﻿
Thus, the Puppysnake was born.  It took ﻿a few tries to figure out what angle I wanted to show him in, and this is what I ended up with, wanting to show the exuberance of the puppy in the front, coming to greet you, and he slithers along with his snake body. 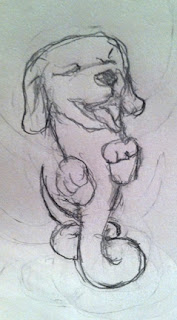 When I want to translate a scratchy drawing into a print, I generally do a solarplate etching.
A solarplate is a light-sensitive, metal-backed plate.  It can be cut with scissors or a very strong cutting board.  It can be exposed using the sun or an exposure box of some kind, and is developed using water.
This is a less-toxic form of printmaking which I have done for many years, with a very crude and simple setup in my studio. Below is a photo looking down on the floor. To the right is the "exposure unit", which is a European tanning lamp set atop a cardboard box with a hole in it and aluminum foil around the edge of the hole, so the light shines in the box.  The foil is important cause the lamp can get very hot, even with only a minute or two of exposure.
To the left is a piece of plywood, a purple piece of foam rubber on top of that, and a thick piece of glass on top of that.  Underneath that glass is where I set my solarplate, face up, and the box w/the tanning lamp is set on top of that.  I look away from the exposure unit when it's on cause some light will escape around the edges.  With the first exposure of the plate, I use a "dot screen" which you can get from http://solarplate.com and other places.  It is helpful to do this initial exposure especially if you have a lot of detail or subtlety, as it helps the plate to be more sensitive to more subtle gradations.  I usually expose it for about 90 seconds, but if you do this type of printmaking you will have to experiment and find what works for you.  For the next exposure, I put a transparency (I have scanned my drawing and transferred it to the transparency) on top of the plate, and under the glass.  The heavy glass holds the transparency flush with the plate. 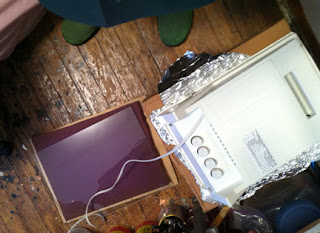 I use nitrile gloves whenever handling the plate, you don't really want to handle it with bare hands cause after all you are still dealing w/chemicals (you can see the blue gloves in the photo below).  After the exposure is done, I have a metal cookie sheet with a magnetic sheet stuck in the middle of it.  That is helpful because the plate will stay in place while you wash it out.  Put some water in the cookie sheet (not too much), and I have a firm but not hard scrub brush that I use to brush the plate once I put it in the water.  After 2-3 minutes of washing out, I gently lift the plate, face up, out of the water and put on a few pieces of newspaper.  I take one piece of newspaper and put it over the plate, lightly rub over it, then throw it away, repeat until the plate is dry.  This needs to be done pretty quickly.  Then I leave the plate near the window so it will dry with some sunlight helping to harden the plate as well as help it dry, "post-exposure".  The post-exposure is not so critical time-wise, in my experience.  But it shouldn't be left there indefinitely .  I would leave for 20 minutes to a half hour, then put in a plastic bag and put in a box so it will be out of the light until I am ready to use it for printing.  ﻿ 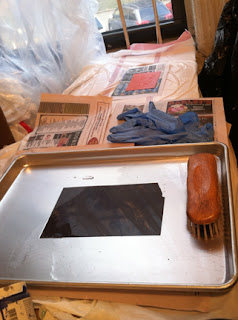 As you can see below, it appears that the plate expsure was good.  You don't want the lines to be TOO deep, but you don't want them to be very faded either, or they won't take the ink properly.  I wing it as far as exposure times and washout times are concerned, because I have done these plates many times.  I suggest you read Dan Weldon's book, "Printmaking in the Sun," or take a class with him or someone else who teaches it, before trying this on your own! There are many variables to deal with and I'm just giving you a summary of the process.
Of course, I suddenly have a few other projects to finish before I get to printing this but that will give me a little time to think about the printing - color of ink? paper? will I do some hand-coloring?? we'll see what happens next :) 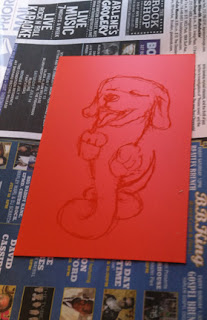